Hello knitters- welcome to 2012!  I am really looking forward to another great year of knitting with you.  As I said in a previous post, the patterns will be coming out around the middle of the month and there will usually only be one pattern (some months will have a bonus pattern).  As always, the patterns are available on Ravelry, so you can start a project page and share your work :)  I've also started a new group called "Year of Swatches."  If you search that under the groups page, you should be able to find it.  I'd like to build a community around these patterns, hopefully so I can get to know you better as well as answer any questions you might have about the patterns.
Well on to what you've really come here for... the knitting!
I've started the year off with a really simple pattern.  Like last year, I am using US7 needles as well as worsted weight yarn (a soft acrylic to make it washable friendly- I have two little one's in the house so its gotta go in the washing machine). 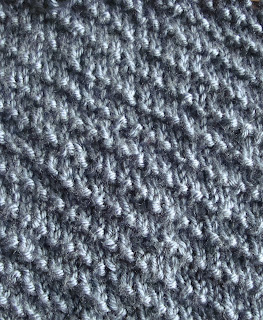 The borders for the left and right sides are in parenthesis.


Repeat these four rows until square is approx 9 inches from cast on edge.