Hello knitters!  Sorry for the delay in this month's patterns.  We took a family vacation this past weekend and even though I had planned on having everything ready before we left, it was not meant to be.  As it happens, I was finishing the square as we were driving in the car.  I do think you will be pleased with this month's pattern though, as it is one of my favorite stitches!

But before we get down to business, it seems I owe you a book as well (Geez Louise!  I've really fallen behind this month)!  It is a pretty quick read (I finished it in a couple of days) and a very thoughtful story.  March's book is How To Be An American Housewife by Margaret Dilloway.  The author's website is here.  There are reviews, excerpts, and even a neat interview video with the author talking about her inspiration for writing the book.  Here's a bit about the book pulled directly from the author's website:


HOW TO BE AN AMERICAN HOUSEWIFE is about the strong pull of tradition, and the lure and cost of breaking free of tradition. Set in California and Japan, it tells the story of Shoko, a Japanese woman who married an American GI as a way of improving her and her family’s fortunes, moved with him to the States, and tried to learn how to be a proper American housewife; and her grown daughter Sue, who finds her own life as an American housewife is not at all what her mother would have wanted for her, or even what Sue had hoped for herself. When Shoko’s illness prevents her from making a long-awaited trip to Japan to be reunited with her brother, she asks Sue to go in her place, and the trip changes both women’s lives in unexpected ways. With beautifully delineated characters and unique entertaining glimpses into Japanese and American family life and aspirations, this is also a moving mother and daughter story. Interspersed with quotations from Shoko’s guide to being an American housewife, this is a warm and engaging novel full of surprising insight. 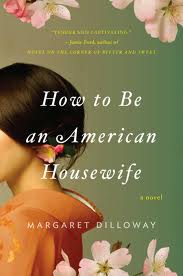 Alrighty then, on to the main event!  March's square of the month is called Raindrops and it incorporates the drop stitch technique!
How do you drop a stitch?  I know, I know.  You have been trying to avoid dropping stitches since you learned how to knit.  And now I'm asking you to do this on purpose?  Have no fear!  We can do it, and make a really neat square out of it.  The thing you want to make sure when you're dropping stitches, is that the drop lines up with a yarn over.  Why?  Well that little eyelet will stop the drop in its tracks preventing it from running all the way down to your cast on edge.  And dropping the stitch itself is no big deal.  You simply remove it from your needle and watch it unravel down to the eyelet.  Let's take a look. 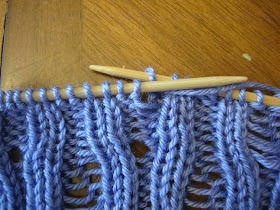 Knit in pattern until you get to the "drop stitch"
(in this pattern it is always the middle stitch of a P3 section)
See how it lines up with the yarn over a few rows down? 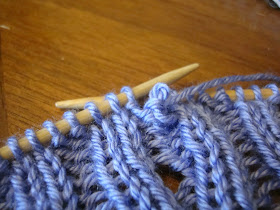 Remove the ''drop stitch'' from your needles. 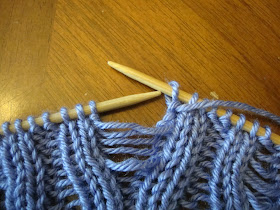 Don't panic as you help that stitch unravel
down to the yarn over! 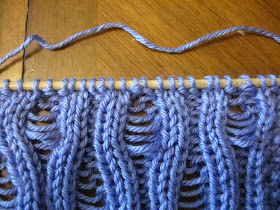 The drop stitch makes neat loops down to the yarn over, then stops!
Yea, you did it!
Raindrops 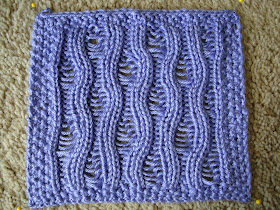